Where have all the Hellbenders gone? 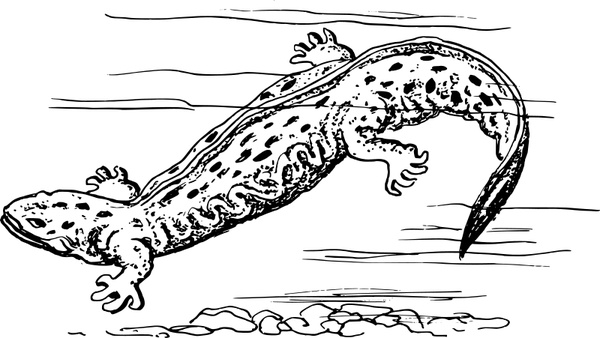 No, I’m not talking about an 80’s rock band or some college frat boys pulling an all nighter. I’m talking about the large oversized salamanders that once could be found in the clear waters of the Ozarks, otherwise known as the Ozark Hellbenders. I honestly didn’t know much about them until about a week ago when I wrote an article about rock cairns. One of my readers pointed out that removing rocks played a role in the destruction of hellbenders and their eggs. It got me thinking and researching on this mysterious creature.

First the Ozark hellbender is basically a large salamander with a flat body great for squeezing under rocks. They love clean, fast, clear waters fed by cool springs. Armored with fleshy folds on the sides of their bodies, they are able to absorb oxygen from the water.  They have a life span of 50+ years and are able to grow to be around two feet long. The Ozark Hellbenders come out mainly at night to hunt and feed on crayfish and fish, but will also eat insects, tadpoles, and other hellbenders. Basically with it’s largemouth the hellbender will eat anything that smells good. Reproduction of hellbenders starts around the age of six and a female hellbender can lay up to around 400 eggs in her lifetime. The eggs take 80 days to hatch if they are not eaten first. Hellbenders have even been reported being caught on fishing lines. Missouri and Arkansas both have dwindling populations. Remaining hellbenders are primarily found in the North Fork, Spring River, Eleven Point River, and the Current River.

What has happened to the Hellbenders?

With the need for clean clear water to be able to breathe, populations have decreased as a result of toxic runoff from mines, roads, farms, factories and sewage leaks.  Dams have also played a part in the destruction of habitats. Without clear cool moving water, the hellbenders just can’t breathe. Removing large rocks and gravel from waterways have disturbed them and have even killed their eggs. Lately an awful disease has been spreading among the remaining populations of hellbenders called “chytrid fungus”. Chytrid fungus kills the hellbenders by causing the skin to grow thick blocking its ability to absorb oxygen from the water.

What can I do to help save them?

Join a stream team and help clean the local waterways of trash. Don’t disturb the habitat of hellbenders by leaving large rocks left alone in the waterways. If you catch one while fishing, don’t try to remove the hook but rather cutting the line near the hook. The hook will do less damage rusting away than trying to remove it.  Don’t use soaps and household cleaners when on the waterways.

I know after my research I have a newfound respect for these creatures and will be more observant when using our waterways for kayaking. I’ll try to find new ways of educating others who might not realize the dangers that we present to these fragile beautiful creatures.

Let me know what you think. Have you been blessed seeing one in the wild? Comment below! Also check out my article on Rock Cairns.