My views on Rock Cairns 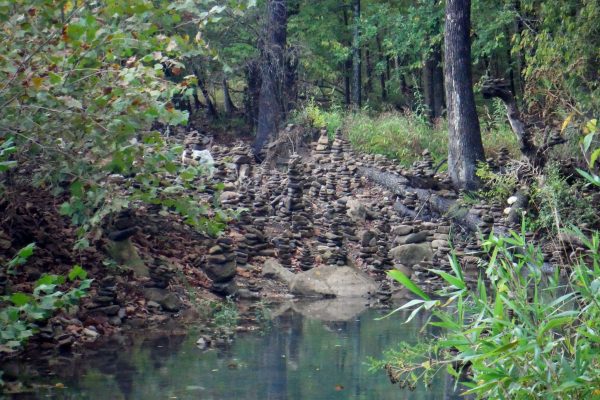 This is a subject that I have many mixed feelings on. Bear with me as I go through these feelings, and then try to shed some logic on the subject. I’ll try to find that middle ground for everyone.

For some of you that might not know what I am talking about, stacking rocks, or rock cairns as some call them, has turned into a big thing across the world. I’ll have to admit that some stacks appear as though it takes some real talent to pull off; Others not so impressive. So here lies the issue. Some say stacking rocks, kills microorganisms. Others say they are an eyesore and we should “leave no trace”. Let’s explore both of these and try to understand the views of both sides.

I’m like most people and don’t want to destroy the rivers or the wildlife around us. I’m not a tree hugger in anyway but I want to leave plenty of wildlife for my future grandkids to enjoy. One of the biggest arguments against rock stacking is that when you stack these rocks you are destroying living creatures and preventing a healthy ecosystem. It makes sense and I understand where this view is coming from completely. However, the only thing that keeps bouncing back in forth in my head is this;  What about rock skipping and fires? Most people I hear complain seem to see no problem with even walking in the creek. Wouldn’t this have the same effect? When the water drops, wouldn’t this also kill some living creatures? Every time you burn that log at the camp fire, aren’t you also killing microorganisms? I can’t help to believe that you can’t pick one activity as being bad without feeling the same about the others. If it’s about killing microorganisms, then we need to stay out of the woods and away from all creeks and rivers completely. I just don’t see that happening for anyone.

Now we also have the argument that it’s an eyesore and we should leave no trace behind. This is a view that I can get behind and support for the most part. There’s nothing like being outdoors and feeling like you stepped back in time when the land was still untouched. I’ve experienced this feeling many times along the Buffalo National River. Every once in a while you’ll come across an old campsite or someone’s trash and it ruins the feeling. However, the river wasn’t set aside just for me. It was made as a park for others to enjoy as well, as long as they don’t ruin it for others. When I come up to a rock cairn, I take in the sight and beauty of the joy it brought someone else creating it. Stop and think about the happiness it brought to its creator! It caused them to enjoy the outdoors. That is a beautiful thing in itself. I don’t stress about it. I don’t get angry like I do with typical eyesores such as spray paint and trash. I admire the talent it took to balance the rocks on themselves. Granted, I don’t want to see one around every corner and this brings me to my conclusion on this issue.

I honestly think everyone wants to enjoy and protect the rivers and woods of this great country. But at what cost? Should we limit people from using the national and state parks? Should we belittle everyone that doesn’t share the same view as us? Of course not. Some people enjoy the woods by photography. Some enjoy the trails and quality time together.  Some want to experience it first hand; getting dirty, building that campfire, swimming in the creeks and kayaking and yes, playing in the gravel bars with rocks and sticks.  Each one of us have our own way of appreciating nature that surrounds us. Maybe the answer isn’t denying others the ability to stack rocks, but maybe encouraging and supporting a healthy, enjoyable way for everyone. I love the idea of leaving the wilderness the way I found it. Maybe pushing the remains of that rock cairn over isn’t a bad idea before you leave. Maybe not making a big deal when you see one is also a good start. I’m a big believer in this;  if you want to win others over to your point of view, a good start would be NOT to belittle them. With that being said, let’s not stress so much on this subject and enjoy what we have. Push that rock cairn over or don’t. Lets focus on the big issues of littering and contamination of our water sources before worrying about something the river will take back with the next big rain.

Please let me know how you feel about this. Should people be allowed to stack rocks?

The video below is provided by my friend and fellow explorer Caveman Outdoors. You can find him on facebook here. Also newer videos on YouTube here.