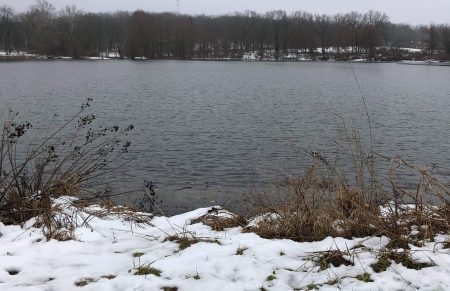 On Friday, Jan. 18th, 2019, I decided to go out hiking on my day off work.  The weather was a little cold, but I decided to put on some layers and get out anyway.  The place I chose was close to Kansas City.  I figured I’d have plenty of other options if I got done early.  The only drawback that almost kept me from going was that this trail was not a loop.  I like to take loops so I can end up back at my vehicle.  The trail was called Blue River Parkway trails.  They offer alot of different terrain and things to see.  I started out in Minor Park near the tennis courts.  I packed my bag with an extra sweatshirt, water, food, and of course my hiking stick which really helped me out.  I headed out toward the river for the river trail and ended up staying off the trail as much as I could due to mud.  The trail eventually took me up to the paved walkway.  I walked down the walkway and decided to explore when I came to a split in the trail.  It took me to the Old Red Bridge.  The bridge was full of “Love Locks”. These are locks you and your significant other take and lock it onto the bridge and toss the keys into the box.  I later learned it’s a popular wedding location.

I headed further north to the North George Lake.  I went west when I should’ve went east.  The trail took me past a park and under an overpass.  The eastern branches Badger and Bridger are winding trails.  Google maps and the trail system map are not accurate but if you follow google maps, it takes you west of the river and there are trail markers all the way through.  The trail will take you up to Indian River with areas that will eventually take you up out of the trail system to the roads.  There are also signs that show where you’re at on the trail.

The Blue River Trail takes you up and out to the Bannister Federal Complex, but being an explorer I wanted to see what was down the side of the trail.  I suspect the Indian River Trail is actually a  23 mile bike trail but is unfortunately impassible at the moment.  There were trees down along this trail and I had to climb over them.  I noticed alot of raccoon, deer, and dog tracks in the snow, which later I learned from my Uber driver, were more than likely from a large cat living down by the river a few people have seen.  I never did inspect the tracks so they very well may have been cat tracks.

The trail was a nice easy trail with several different areas to explore, including a waterfall, lakes, an old foundation, mountain biking trails, rugged climbing trails, and scenic river trails.  I’ll be going back to see if I can find that mystery cat nobody’s seen. I can only wonder how much of the trail the cat was watching from the bushes across the river.